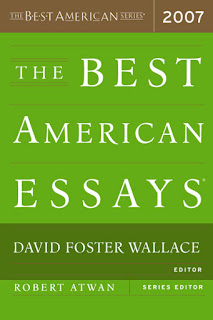 The twenty-two essays in this powerful collection -- perhaps the most diverse in the entire series -- come from a wide variety of periodicals, ranging from n + 1 and PMS to the New Republic and The New Yorker, and showcase a remarkable range of forms. Read on for narrative -- in first and third person -- opinion, memoir, argument, the essay-review, confession, reportage, even a dispatch from Iraq. The philosopher Peter Singer makes a case for philanthropy; the poet Molly Peacock constructs a mosaic tribute to a little-known but remarkable eighteenth-century woman artist; the novelist Marilynne Robinson explores what has happened to holiness in contemporary Christianity; the essayist Richard Rodriguez wonders if California has anything left to say to America; and the Harvard biologist Edward O. Wilson attempts to find common ground with the evangelical community.

In his introduction, David Foster Wallace makes the spirited case that “many of these essays are valuable simply as exhibits of what a first-rate artistic mind can make of particular fact-sets -- whether these involve the 17-kHz ring tones of some kids’ cell phones, the language of movement as parsed by dogs, the near-infinity of ways to experience and describe an earthquake, the existential synecdoche of stagefright, or the revelation that most of what you’ve believed and revered turns out to be self-indulgent crap.”